In the last half-year, investors bid up the value of Nio (NYSE:NIO) whenever the company posted its monthly and quarterly delivery figures. Strong electric vehicle (EV) unit sales are a good headline story, especially for NIO stock.

NIO stock is starting to lose steam as its market capitalization approaches $100 billion. Investors betting on the multi-year growth in demand for EVs may ignore the volatility. Besides, as long as Tesla (NASDAQ:TSLA) posts barely any profits, Nio need not do so, either. So, after rising by nearly 2,630% from its 52-week low, its upside potential may waver. The stock needs ongoing momentum to lift the stock to new daily highs.

Nio posted fourth-quarter and full-year 2020 delivery figures on Jan. 3. Shares added more than $10 in the days that followed. Investors liked the triple-digit percentage year-over-year delivery figures across the board. Deliveries rose in Dec. 2020, for Q4 and the year.

On Jan. 11, Motortrend published the first look of NAD in Nio’s ET7. It reported the offering is an optional subscription service. This is great news for shareholders because it is a recurring revenue stream. The higher the cash flow from operations, the closer Nio gets to profitability.

Nio’s self-driving technology is nothing short of impressive. It will have 33 sensors, 11 eight-megapixel cameras and one ultra-long-range LiDAR (Light Detection and Ranging) unit. The ET7 will also have 12 ultrasonic sensors and two positioning units. These sensors will feed up to eight gigabytes of data per second to the car’s computer.

Such specifications will complement the EV’s luxurious design. For example, owners will still get a 1,000-watt sound system and ventilated and heated seats (front and rear). The latter offering does not differentiate Nio against its competition. For example, Tesla offers heated front seats as a standard feature. Yet heated rear seats require an upgrade to the Model 3.

Nio will probably not need to out-class Tesla to sell more units. China is a big enough market that both firms will enjoy increasing unit sales for years to come. Still, if the economy worsens and Chinese consumers scrutinize pricing and features, Nio will come out ahead.

On Wall Street, 14 analysts have an average price target of $65.28 (per Tipranks). At a modest growth score, as shown below, Nio may not have as much upside as investors expect. 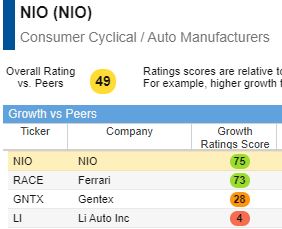 Applying the strong growth prospects ahead with a growth ratings score of 75/100, readers should assume a revenue growth rate of a solid 155% at its peak. Also, the 49/100 overall rating suggests that competition could eventually heat up. In a five-year discounted cash flow EBITDA Exit model, use the EBITDA Exit multiple to calculate Terminal Value after five years. Apply the following metrics below:

The single-digit EBITDA multiple would reflect growth peaking in the fiscal year 2022. It then falls from 2023 to 2024 as competition increases. The model still assumes revenue growing in the triple-digit range. The fair value is around $46.

Readers will notice that the model is adjustable with your metrics. It already assumes an optimistic future for the EV firm.

Buying Nio after its strong rally over the last year is not without risk. The stock trades at a stretched valuation. The company has so far proven it is growing at a fast pace. However, that is not enough. Revenue from EV sales must continue growing, and subscription revenue must accelerate too. Chances are good that will happen. If Nio shares dip, consider starting a position and holding for the longer term.

Read The Full Article On: Marketbeat Ohio-based electric vehicle (EV) maker Lordstown Motors (NASDAQ: RIDE) stock has been on a  rollercoaster ride hitting peaks in the $29…

Read The Full Article On: Finance Baidu (BIDU) may be best known as China’s answer to Alphabet’s Google (GOOGL), but that’s not why investors have…

Read The Full Article On: Finance China’s fundraising boom for electric cars looks set to continue through the Year of the Ox as the capital-intensive…

Read The Full Article On: Fool This article represents the opinion of the writer, who may disagree with the “official” recommendation position of a Motley…

Read The Full Article On: Investorplace Fisker has the talent, resources and vision to be a big player in the EV space My bullishness on…