Read The Full Article On: Motorauthority

On this episode of Jay Leno’s Garage, Leno shows how fewer wheels can equal more fun. That’s because this video spotlights the all-electric Vanderhall Edison 2.

The Edison 2 is an electric three-wheeler based off Vanderhall’s existing gasoline-powered models. It’s powered by a pair of electric motors and an air-cooled, front-mounted 28-kWh battery pack. One motor drives each front wheel, with a combined output of 140 horsepower and 232 pound-feet of torque. Instead of using a transmission, each front wheel is connected to a motor via a belt that runs to an individual planetary gearset.

Thanks to its three-wheeled configuration, the Edison 2 is unlike any other electric vehicle. It combines an open-air driving experience with the silence of electric motors. It also turns heads like few other vehicles, as we learned during a first drive earlier this year in Beverly Hills. In an area where Rolls-Royces are as common as Toyota Camrys, the Edison 2 still managed to stand out from the crowd. 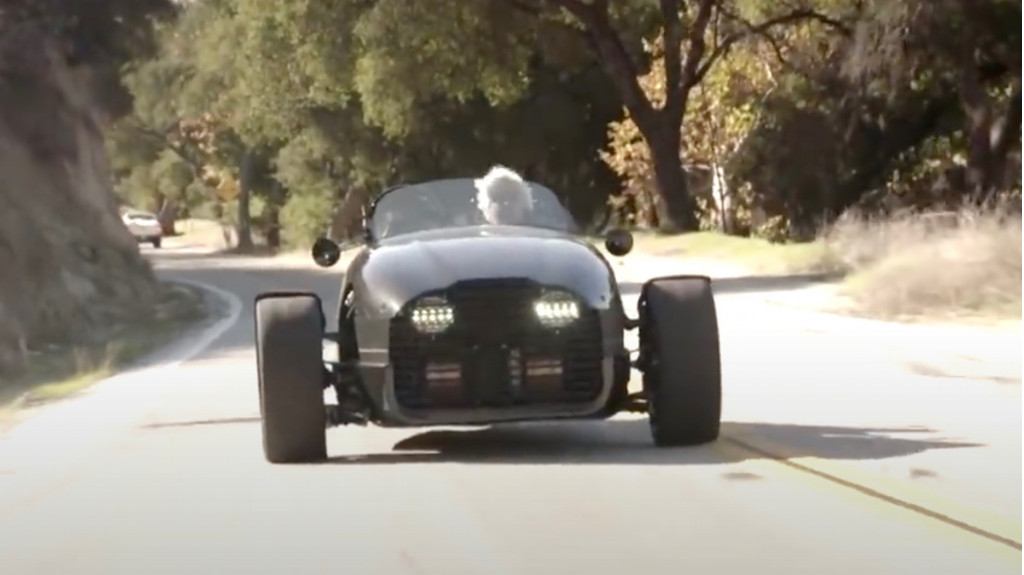 Despite its name, the Edison 2 is actually the first model in the all-electric Edison range. Vanderhall uses numbers to denote where variants of a given model sit in the lineup. A more-expensive and more-luxurious Edison 4 is on the way. Based on the Vanderhall Carmel, it will feature doors, cruise control, a wooden steering wheel, and other extras. Vanderhall previously told Motor Authoritythat Edison 1 and Edison 3 models could be added in the future as well.

Leno enjoys his time in the Vanderhall Edison 2. He compares it to a sports car and notes that its electric power makes it a guilt-free driving experience. He also acknowledges that it’s not practical, but he likes that it is built in Utah and appreciates the way the electric power is delivered. Jay says the car has 150-200 miles of range.

Watch the full video to learn more about whay Jay thinks of the Edison 2 as he drives it on the streets of Los Angeles. As a bonus, Jay discusses a bit of the history behind the car’s namesake, inventor and electricity pioneer Thomas Edison.