Read The Full Article On: Thisismoney

New car registrations sank 89 per cent to the record-lowest May for motor sales since 1952, according to official figures published today by the Society of Motor Manufacturers and Traders.

Just 20,247 motors were registered – down from 183,725 in May 2019 – as ‘click and collect’ sales during the month failed to spark UK sales to bounce back at a similar rate as it has in other markets across Europe.

But the impact of car showrooms being closed throughout the month couldn’t strangle demand for electric vehicles, with registrations of zero-emission models up by 22 per cent in May – and the Tesla Model S was again crowned the most-popular new car in the UK, as it was in April. 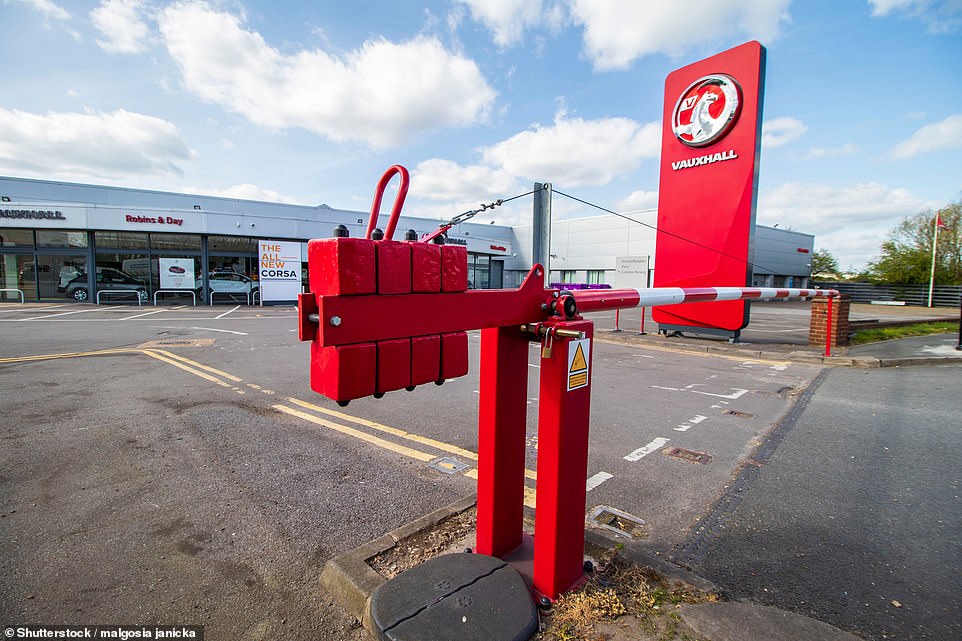 May misery for motor industry: New car registrations slumped by 89% last month as dealerships remained closed. Some 20,247 motors were sold in May, aided by showrooms being able to provide ‘click-and-collect’ services on site

Mike Hawes, chief executive at the SMMT, said the ‘devastating impact on the market’ was ‘inevitable’ given that dealers endured a second month of coronavirus shutdowns.

The advent of ‘click and collect’ services mid-way thorough May did provide some means of showrooms completing sales, with registrations improving over the 97 per cent nosedive recorded in April.

However, the 89 per cent slip to the lowest May registrations for 68 years puts the UK automotive industry behind other European markets which posted more improved statistics.

In Italy, which saw a 96 per cent slump in April, registrations declined just 53 per cent year-on-year in May.

France was one of the best market performers, exceeding expectation with a 47 per cent decline last month compared to the 89 per cent fall recorded in April.

New car registrations in Spain were down 71 per cent in May, which was an improvement on the 96 per cent decline a month previous.

Ireland posted an improvement, too, despite the fact all dealerships were closed during the month. Registrations of 1,750 new cars in May was down 72 per cent year-on-year but will be seen as a step in the right direction following the 96 per cent plummet in April. 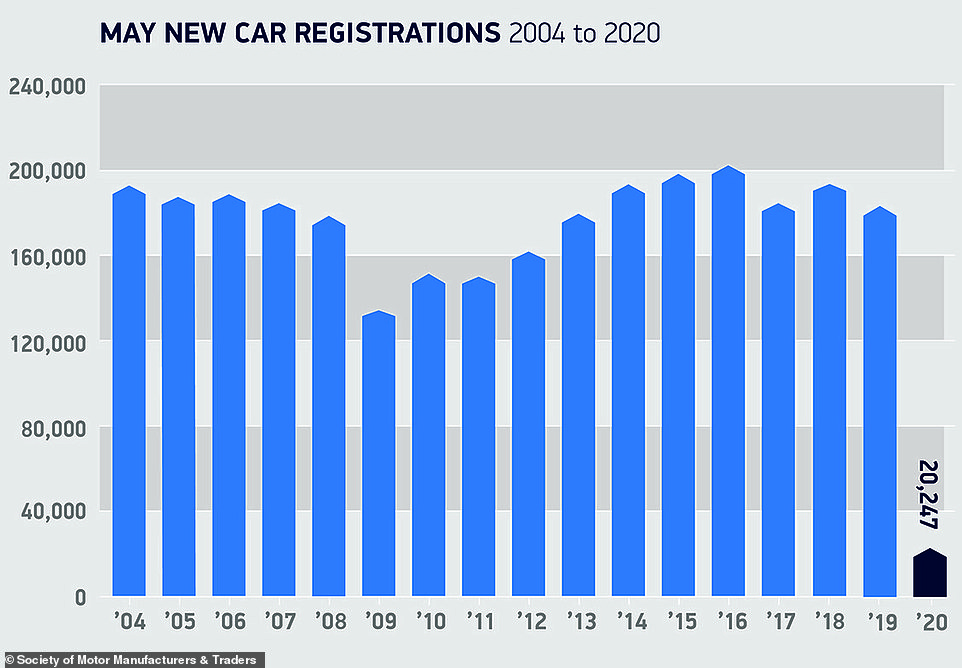 Mike Hawes, chief executive at the SMMT, said the ‘devastating impact on the market’ was ‘inevitable’ given that dealers endured a second month of coronavirus shutdowns

Mike Hawes said the recovery of the UK car market will truly begin this month now that dealers have been allowed to open since 1 June as part of the latest measures to ease the lockdown – granted showrooms have social-distancing protocol in place.

Hawes said that this week starts a ‘pivotal moment for the entire industry and the thousands of people whose jobs depend on it’.

‘Customers keen to trade up into the latest, cutting-edge new cars are now able to return to showrooms and early reports suggest there is good business given the circumstances, although it is far too early to tell how demand will pan out over the coming weeks and months,’ the SMMT boss added. 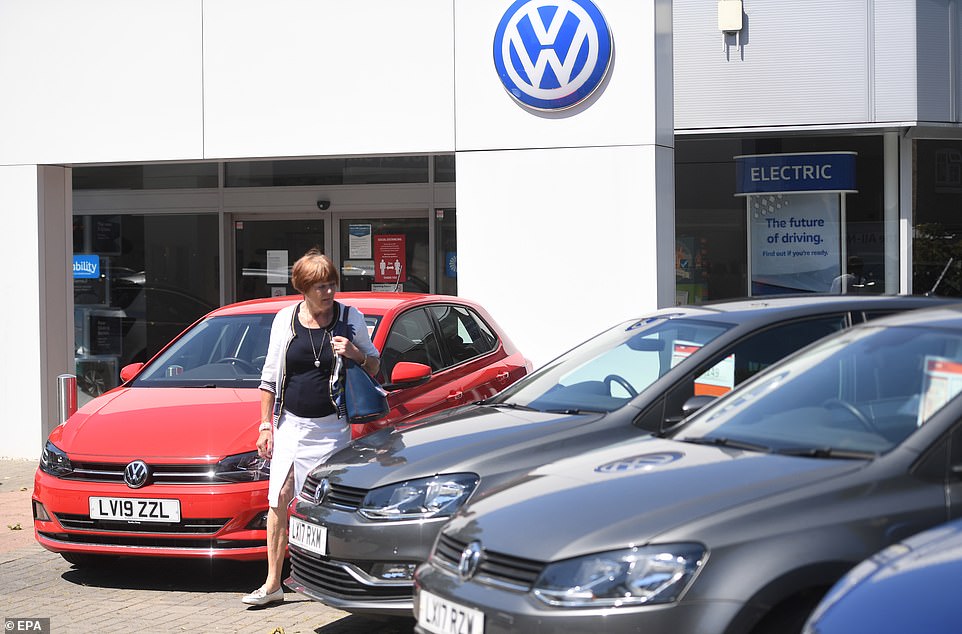 Car dealerships have been allowed to reopen as of 1 June under the latest eased measures introduced by the Government. The SMMT said now is a ‘pivotal’ time for the industry to recover 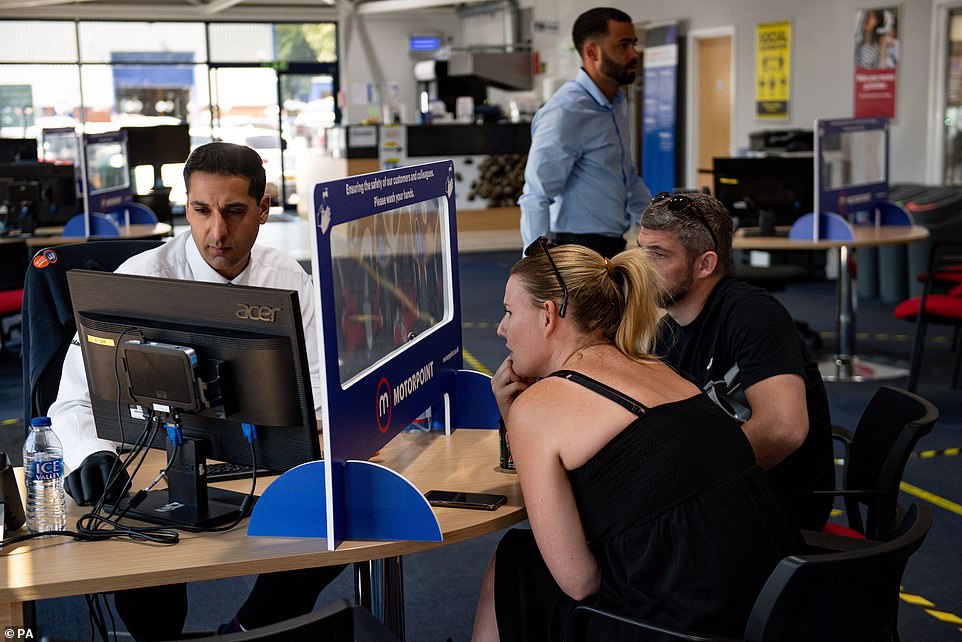 Dealers have had to incorporate new social distancing measures in their showrooms, including screens to divide salesmen from customers

‘Restarting this market is a crucial first step in driving the recovery of Britain’s critical car manufacturers and supply chain, and to supporting the wider economy.

‘Ensuring people have the confidence to invest in the latest vehicles will not only help them get on the move safely, but these new models will also help address some of the environmental challenges the UK faces in the long term.’

The manufacturer with the second highest registrations last month was Mercedes-Benz with 2,002, down 86 per cent.

Coincidentally, both Ford and Mercedes sold more examples of a van than they did passenger cars in May.

Some 903 Ford Transit Customers were registered (along with an additional 580 standard Ford Transits) and 899 Mercedes Sprinters – the best-selling of all vehicles in April – were also bought by businesses.

That’s more than the best-selling car model, which was… 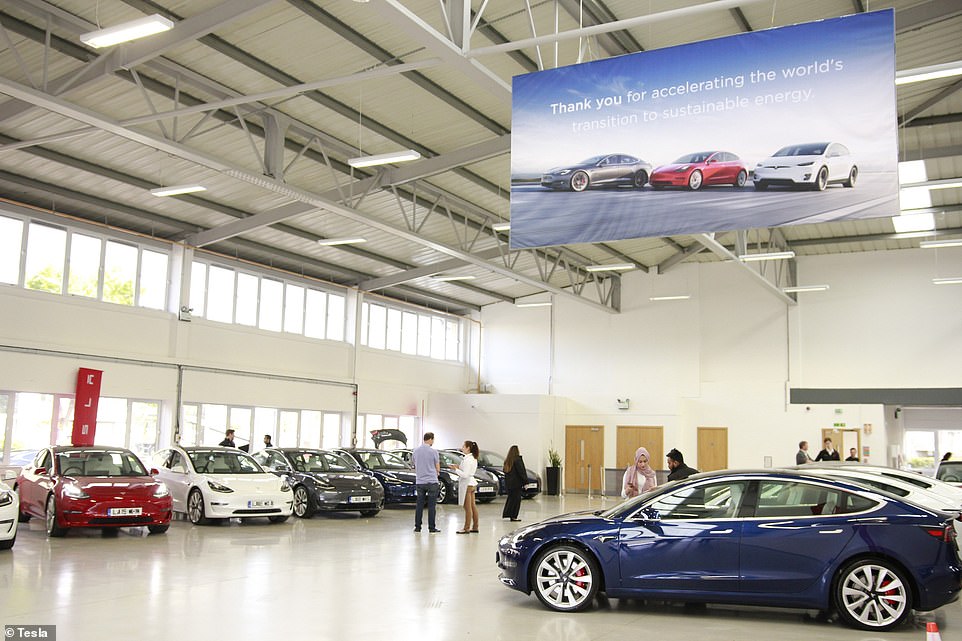 The Tesla Model 3 was the most-registered car in the UK for a second month running, as a backlog of orders continues to drip feed into the UK. Picture shows customers collecting their cars last year, before the pandemic struck

While there were declines in registrations of all other fuel types, battery electric vehicles saw an uplift of 22 per cent in May.

Some 429 more zero-emission electric cars were sold compared to May 2019, which the SMMT said was due to pre-orders of the latest premium models being delivered to customers.

Top of the list of premium plug-in motors was the Tesla Model 3. For a second month running it was the most-bought car in the country, with 852 being registered in May.

That was 62 more than the second most popular motor of the month, Vauxhall’s Corsa, and 82 more than the UK’s most-bought car for the last 11 years running, the Ford Fiesta.

Tesla’s two-month table-topping form is the result of orders placed months ago still being delivered and the US firm’s unique sales and delivery system, that negates the need to visit a showroom at all.

Thousands of UK drivers put their name down for the firm’s most affordable electric model when order books opened in March 2016, though production delays and holds-ups with deliveries means the logjam of pre-orders placed in the last four years are still arriving today,

Tesla switched to contactless handovers at the customer’s homes or at its delivery centres when the UK went into lockdown, while many other manufacturers have had to suspend UK operations.

All supporting paperwork for the purchase of the vehicle is pre-organised via the customer’s Tesla Account online, meaning no need to sign contracts with salesmen.

On the day the car is delivered, the vehicle is left in a safe location with access arranged via the Tesla smartphone app. 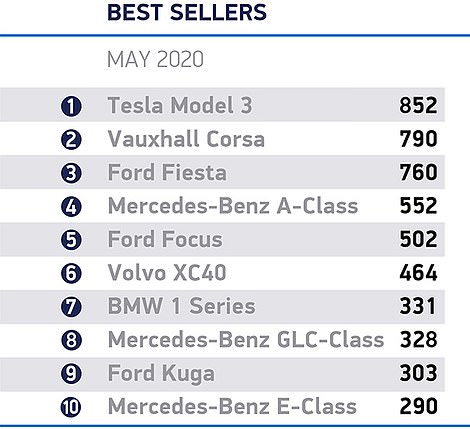 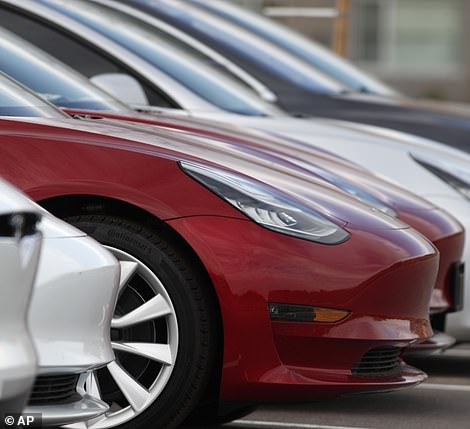 Commenting on the continued demand for electric vehicles across Europe, Felipe Munoz, global analyst at JATO Dynamics, said: ‘These [electric] cars are likely to become the top choice for consumers seeking private transportation.

‘Manufacturer who have invested heavily in EVs are best placed to navigate the tough months ahead.’

Tom Clarke, head of electric vehicle strategy at LV= General Insurance said the business had seen an upward trend in the number of electric car insurance policies being taken out in the last two weeks.

‘At the end of May, the number of policies stood at the highest level we’ve seen since the end of March, and we expect this trend to continue throughout June,’ he explained,

‘Tesla is still the most popular electric car we insure, making up 36 per cent of our book, with Nissan being the second most popular model, reflecting today’s figures from SMMT.

‘In May, however, we insured more Nissan Leafs and Volkswagen e-Golfs than Teslas, perhaps indicating the growing interest in more affordable electric car models. Could a Government-backed scrappage scheme be on the cards?

Mike Hawes has been in communication with Chancellor Rishi Sunak over a potential government-backed scrappage scheme to help the industry recover from Covid-19, with The Guardian publishing extracts from a leaked letter from the SMMT boss.

In it the trade body estimates that a scheme offering £2,500 off a new model when a motorists scraps their older car could see an extra 600,000 vehicles being purchased.

What Car? editor Jim Holder said: ‘Our research on in-market buyers shows more than a third are intending to purchase a new car in the next four weeks, so we should be seeing a surge in registrations in June.

‘On the other hand, we are also seeing the number of buyers looking to purchase in the next six months declining, suggesting that long term consumer confidence is on the wane.’ 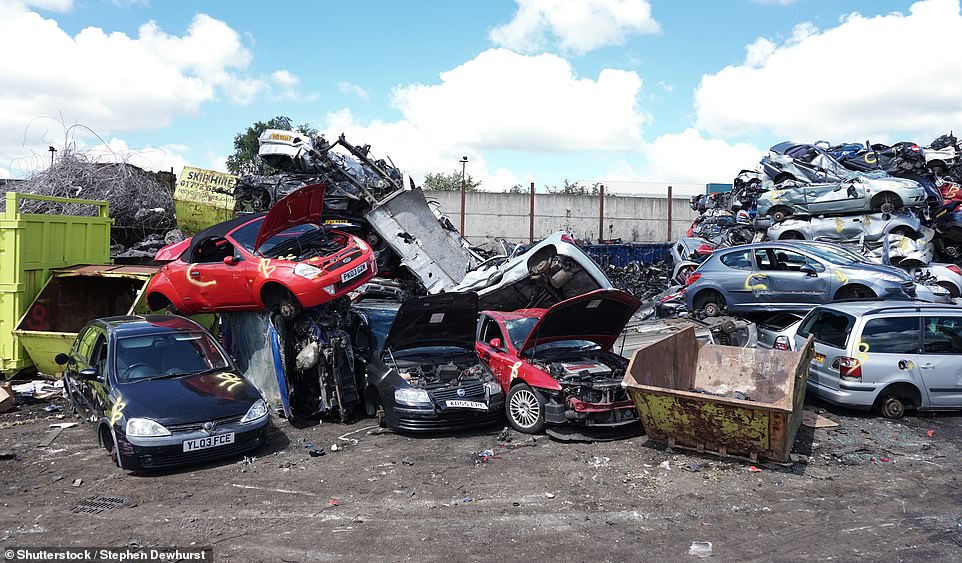 Holder said he expects pressure to mount on the government to look at an incentive – such as a scrappage scheme – to support the sector in the medium-term, as it did following the financial crisis 11 years ago.

‘The calls for Government intervention in the automotive retail sector is only going to grow in the coming weeks. Unlike 2009, the market is starting from effectively zero. That’s a big hill to climb.

‘A new scrappage scheme could be a positive lever, not only in supporting sales and raising more taxes, but in boosting the emissions targets by taking older, more polluting vehicles off the road in favour of ultra-low carbon and electrified alternatives.’

The overall market is now down 51 per cent in the first five months of 2020, at just over half a million registrations compared with more than one million at this point last year.

The SMMT has already downgraded its new car sales forecast to just 1.68million registrations in 2020 – the lowest figure in three decades.

This puts the sector on course to record its worst performance since 1992’s 1.59million registrations and a year-on-year decline of more than a quarter. 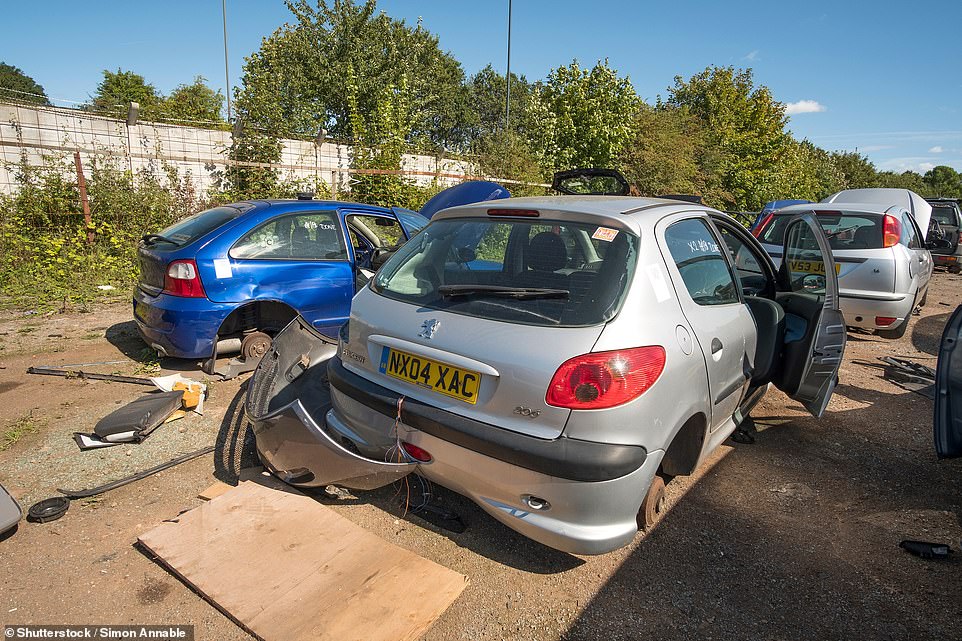 A leaked letter sent to the Government from Mike Hawes, boss of the SMMT, suggested a £2,500 scheme could see up to 600,000 new motors hitting the road

Commenting on the leaked communication to the government, Hawes said in a statement today: ‘Like many sectors, we have been in constant communication with government, highlighting the situation and what support might be needed when the immediate crisis eases.

‘Showrooms opened in England yesterday and reports so far suggest a positive response from consumers.

‘However, while there will be some pent up demand, the effect on underlying consumer confidence will be unclear and we may need to work with government to identify ways of boosting demand, especially given the contribution this sector makes to the economy and jobs.

‘That time is not now but industry, and government, need to be prepared for all eventualities.’

Michael Woodward, UK automotive lead at Deloitte, said that despite the optimism for the market recovering from the start of June, there is still ‘uncertainty around consumer behaviour’, which may cause people to ‘think twice about making major purchases at this time’.

He added: ‘Operational issues also have the potential to hamper the speed of recovery. For instance, purchased cars may be stuck in-situ as manufacturers try to ramp up production.

‘Similarly, the inventory that dealers have may not meet the specifications required by consumers – especially those who are looking for low cost alternatives to public transport.

‘During the previous economic downturn most European countries brought out scrappage schemes to boost sales. The majority of manufacturers will be offering big incentives to support early sales, but if the buying public believe there are further incentives to be had, this could stall vehicle purchases in June.’