Although it may be hard to believe from the pictures alone, this heavily damaged Tesla Model 3 is still driveable. Still not convinced? There’s a video demonstration showing it going for a short cruise, although the electric sedan is being driven very slowly. Can’t imagine why. It’s also up for sale on eBay though how it came to look like this remains a mystery.

However, it can still supposedly accelerate very quickly, but we wouldn’t recommend that in its current state. Could this be a potential project car especially given that many of us are at home with plenty of spare time on our hands? That might sound fun in theory but realistically speaking it’ll likely become quite a burden.

According to the listing, this is a 2018 Tesla Model 3 Performance with just over 6,700 miles on its clock. The suspension and front axles are said to be new, but there is a dent on the bottom of the battery though it doesn’t reportedly affect its charging capability.

Before anyone decides to place a bid, which has a $15,000 reserve, they should be made aware or reminded by the fact that Tesla doesn’t take too kindly to those who by and restore its salvaged vehicles. Parts are hard to come by and software updates may or may not be provided. 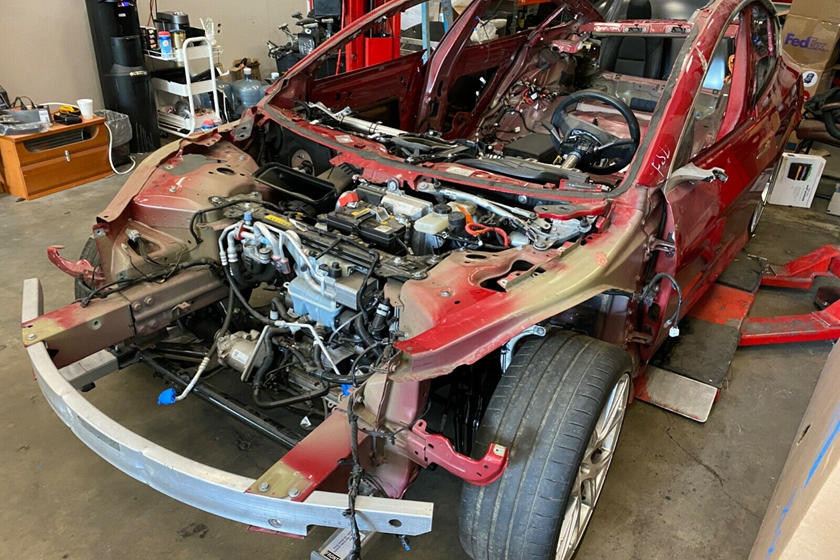 Tesla also won’t allow its vehicles that have been registered as salvaged to connect to its Supercharging network. Bear that in mind. The seller also claims this Model 3’s parts are worth more than $20,000 alone.

There are still four days left to the auction and, as of this writing, the highest bid was $14,100.01, but at this rate, the reserve will very likely be met and perhaps even exceed it. Clearly there are some who seriously want to take on this project. Respect for them.