In our October 26th Digest, we showed you this chart …

Then, based on research from our macro specialist, Eric Fry, we wrote that it was time to buy into the associated sector.

Here’s the same chart from above, updated to the present. We’ve circled what’s happened in green …

What you’re seeing is the CRB Commodity Index. It tracks futures prices for a basket of 19 commodities. Everything from aluminum, to coffee, to cattle, to nickel, to silver.

We’ve begun a new commodities supercycle, meaning this 15% gain is likely just the start of a multi-year bull market.

You see, Eric isn’t interested in most of the sub-sectors included in CRB Index such as corn, cotton, heating oil, hogs, cattle, and orange juice …

Eric is focused on one particular corner of the commodities market — base and industrial metals.

To zero in on that, let’s look at the ETF, XME. That’s the SPDR S&P Metals & Mining ETF. It holds heavyweights including Hecla Mining, Freeport-McMoRan, and Cleveland-Cliffs.

As you can see below, since we profiled Eric’s work on commodities on October 26th, XME is up 42% while the S&P has climbed only a quarter of that.

In today’s Digest, let’s revisit the commodities supercycle, and how it’s going to drive major returns for years to come.

***The commodities supercycle being driven by tomorrow’s technology

You think electric vehicles have a bright future? You think batteries will make a great investment? You’re betting on solar energy this decade?

Well, guess what all of those innovations must have …

You guessed it — base/industrial metals.

A multi-year bull is just getting underway. And this could be a big one.

This means he starts his investment analysis by looking at the big-picture forces that are driving global markets.

That could lead him to, say, a frontier-market stock … or possibly an opportunity in South American currencies … or in this case, a possible boom in commodities.

If you’re newer to commodities, it’s important for you to understand how this sector differs from stocks. In short, it’s far more cyclical, with epic booms and brutal busts.

These are called “supercycles.”

No two supercycles are identical. But they all share two distinct traits:

1. In their youth, they produce huge investment gains.

2. In their advanced years, they produce huge investment losses.

That’s why it’s so important to pay attention to them early on. They grow up so fast.

You can see the rise and fall of this last cycle below by looking at the same TR/CC CRB Commodity Index (CRB) that opened this Digest.

This collapse erased nearly all its prior supercycle gains. 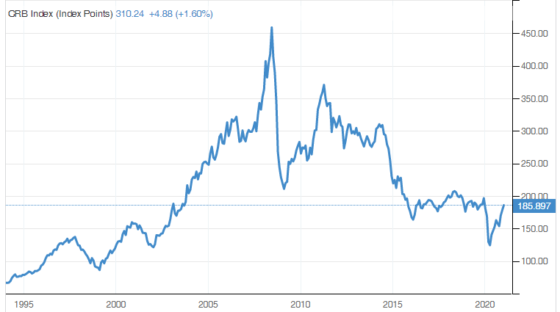 Obviously, without the benefit of hindsight, no one can be certain that the commodity rally is the birth of a new supercycle.

But the devastating commodity bear market of the last decade was exactly the sort of event that creates conditions for a new bull market.

Regular Digest readers know that we believe electric vehicles (EVs) will be one of the biggest trends of this decade.

Last Thursday, we profiled Luke Lango’s research on the sector which highlighted how only 3% of the population owns an electric car today, yet 60% of prospective car buyers want their next car to be electric.

This underscores a simple reality …

The global EV market is at a critical inflection point, wherein electric cars will go from niche today, to mainstream over the next few years.

Well, it turns out that the metal, copper, is a much-needed part of the electric vehicle growth story.

Copper is a major component in EVs used in electric motors, batteries, inverters, wiring and in charging stations.

A pure electric vehicle can contain more than a mile of copper wiring in its stator windings.

The publication goes on to write that electric vehicle sales growth will increase demand for copper by 1,700 kilotons by 2027.

You can get a sense for the enormity of that demand in the chart below.

This explosive growth makes sense when you contextualize the amount of copper needed for electric car manufacturing.

The Copper Development Association reports that conventional cars have 18-49 pounds of copper.

With that as a baseline, what’s your guess as to how much copper is in a hybrid electric vehicle?

And if we look at a pure, battery electric vehicle, the amount of copper used jumps to 183 pounds.

Given this 273%-916% increase in copper needed for electric vehicles compared to conventional cars, it’s easy to see why demand is poised to soar as our world continues to move away from gas-fueled cars.

Now, what’s key here is that while demand for copper is surging, supply isn’t there to meet the need.

… large supply deficits are also on the horizon, perhaps as early as this year.

The story is becoming all-too-familiar: Soaring new demand from EVs and other electrification technologies, coupled with stagnant global supply growth, is creating a supply deficit in the copper market.

Something does not come from nothing. That fact can be easily forgotten when it comes to seemingly abstract concepts like “energy.”

As the climate change crisis worsens, more politicians are starting to underscore the importance of transitioning to clean energy.

In some cases (like silicon for solar panels), higher demand is unlikely to be an issue …

But our supply chains for other materials — like neodymium for wind turbines, lithium and cobalt for batteries, and copper for basically everything — may need to shift.

Now, take a look around the world today and you’ll find countless governments pledging to take steps toward renewable energy in the years to come.

It turns out that researchers from the Dutch Ministry of Infrastructure analyzed the volume of base and rare earth metals that will be required by 2050 in order to make enough solar panels and wind turbines to effectively battle climate change.

According to their study, demand for some metals such as neodymium and indium could explode by more than a dozen times by 2050. There simply might not be enough supply to support the green energy revolution that many governments want.

This shift is what I’ve been calling the Second Electric Revolution — the massive global migration toward “green technologies” like electric vehicles (EVs), renewable energy, and energy storage.

All of these innovations are “metal hogs.”

The average solar power project, for example, requires about five times as much copper per megawatt of capacity as a conventional fossil fuel plant. Offshore wind farms demand about 10 times as much.

The global battery market is also gobbling up a growing percentage of global metal supplies.

Demand from lithium-ion batteries has grown more than 20-fold in the past 10 years.

Looking ahead, Bloomberg New Energy Finance (BNEF) predicts nickel demand for EV batteries will skyrocket 14 times over by 2030. The chart below shows a range of similarly mind-boggling demand projections for other industrial metals.

***How to play this explosion

In past cycles, Eric has recommended various resource stocks — from nickel and copper miners, to uranium producers, to silver companies.

Today, you could look at Eric’s “Best Stock for 2020” — Freeport-McMoRan (FCX). It produced a 99% gain for investors last year, but Eric still likes it today.

You could also look into Antofagasta Plc (ANFGF), a Chilean copper miner.

Then there’s the ETF, XME, that we referenced at the top of this Digest.

But for Eric’s favorite picks, I’d point you toward his special report, Investing in Red, White, and Blue Stocks … for a Six-Figure Payday. It’s yours when you sign up for Eric’s Investment Report newsletter. It holds two explosive ways to play this demand for base/rare earth metals.

Plus, Eric’s official Investment Report portfolio contains a handful of other top-tier commodity investments to ride this supercycle. Learn more by clicking here.

As we wrap up, I’ll gave Eric the final word:

… the trend is clear. And this trend points quite clearly to booming demand for battery metals.

As these metals climb from their lows, look for them to lead the entire CRB Index higher. This new commodity supercycle could produce the mother of all mean regressions …

The base metals boom is here … and so is a brand-new commodity supercycle.

Have a good evening,

Read The Full Article On: Investorplace These business models are likely to create value in the long-term David Erickson, a senior fellow in finance at…

Read The Full Article On: Shine When the green movement first washed over the global auto industry, plug-in hybrids that operate on both gasoline and…

Read The Full Article On: Investorplace Lucid Motors could be a trillion-dollar company by 2040, so buying CCIV stock today could be like buying TSLA…

Read The Full Article On: Techxplore Professor Jeremy Michalek and his Ph.D student Matthew Bruchon have published a study investigating what vehicle electrification would look…