Nio (NYSE:NIO) has been absolutely on fire this year, with NIO stock surging nearly 400% higher on the back of abundant optimism that the company is finally turning into what it was hyped up to be from the start: the Tesla of China.

This optimism is not misplaced. EVs are taking over the world, and NIO does project as the Tesla of China.

To that end, while the rally in Nio’s stock has been jaw-dropping in 2020, this uptrend is here to stay. After all, NIO is still worth just $25 billion. Tesla, by comparison, is worth $400 billion. 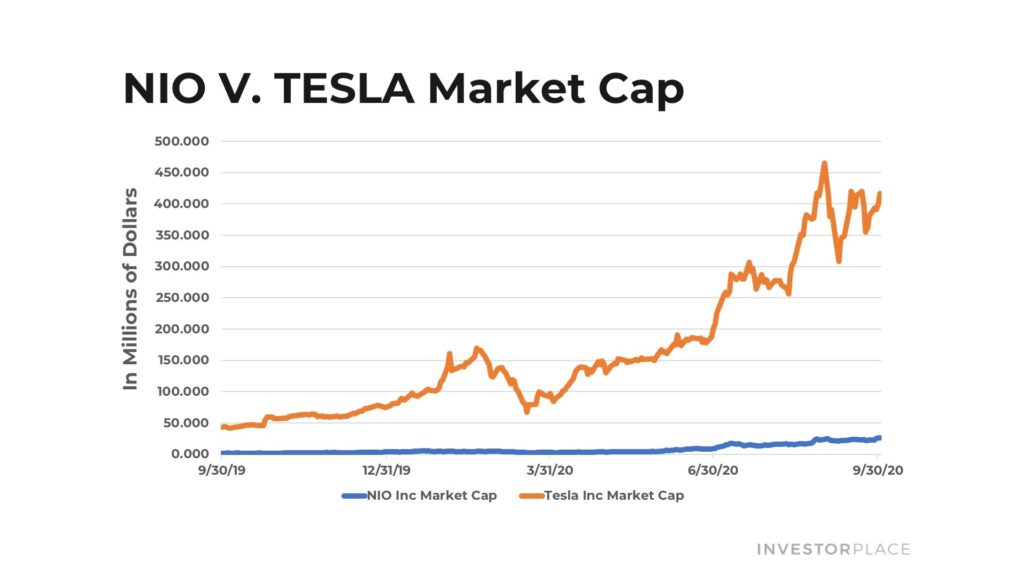 Over the next several years, China’s auto market will get electrified, NIO will dominate the premium segment of that market and sell a ton of luxury EVs at favorable margins, revenues and profits will surge higher, and NIO will soar toward $40 per share.

On the bottom line, this means you should buy NIO today because its winning streak is far from over.

I’ve said it before (many, many times) and I’ll say it again.

Electric vehicles are the future of transportation.

Demand is shifting, as young consumers — who are hyper-aware of the environment and want to “save the planet” — are shunning gas cars in favor of EVs, with a 2018 survey from HPI finding that 91% of millennials are considering buying an electric car for their next vehicle purchase.

Importantly, these young consumers are only acquiring more and more purchasing power, and — by the 2030s — will be the largest driving force in the automobile market.

A the same time, the technology is improving, because the aforementioned demand shift is attracting more and more resources and talent into the EV space — the sum of which is driving huge advancements in EV battery technology, so that these cars are driving farther, recharging faster and getting way, way cheaper (the median sales price of a new EV dropped 70% between 2010 and 2016).

These technological improvements will only accelerate over the next several years alongside accelerating demand, and — by the 2030s — EVs will be able to drive for thousands of miles, will recharge in minutes and will cost far less than your average diesel car.

Thus, by the 2030s, every prospective car buyer will want an EV, and those EVs will be deliver significant performance at affordable prices.

It doesn’t take a rocket scientist to connect those dots.

Between now and 2040, EVs will go from niche to ubiquitous. Alongside that exciting journey, pioneering EV makers — like NIO — will grow by leaps and bounds.

NIO is an especially attractive play in the EV space because the EV opportunity in China — NIO’s home market — is huge.

Thanks to robust government support, China’s huge auto market is also home to the world’s most mature EV market. One out of every two EVs sold in the world in 2019, was sold in China.

This robust government support isn’t going away anytime soon. China is targeting 25% EV sales penetration by 2025 — versus less than 5% penetration today. If that happens, it means China’s annual EV delivery volumes will reach over 5 million by 2025 — up 4+ million (or ~360%) from 2019 levels.

In other words, the EV opportunity in China is both huge (because of China’s enormous auto market) and has high visibility (because of the Chinese government’s continued strong support of clean energy adoption).

To that end, the biggest and best names in the EV megatrend — ex Tesla — may emerge out of China. In that group of Chinese EV makers, NIO is the best-in-breed when it comes to premium EVs — implying huge long-term upside potential for NIO stock.

Nio Is Killing the Game

Make no mistake about it. NIO is absolutely killing the game in China’s premium EV market.

The company has rattled off five consecutive months of triple-digit deliveries growth, including 104% year-over-year growth in August. And that’s with just two vehicles, the ES6 and ES8. The company just launched a third vehicle, the EC6, which should help spark even bigger growth in the last few months of the year.

Importantly, NIO is doing this while China’s EV market isn’t booming. Thanks to the pandemic, China’s EV volumes are expected to drop 11% this year. NIO’s volumes will likely rise by more than 100%.

So, this isn’t a “rising tide lifting all boats” dynamic. It’s a “speed boat leaving everyone else in the dust” dynamic.

They’ve cultivated strong brand equity and customer loyalty through Tesla-like marketing. They’ve cut out a high-demand and burgeoning niche in the premium market, and have proceeded to dominate that niche with superior performance vehicles. And they’ve continued to lean into a novel battery-swapping model which removes the cost of battery ownership from the driver, and therefore significantly reduces the prices of its EVs.

All in all, NIO is absolutely killing the game in China’s premium EV market. So long as the company continues to do so, Nio’s stock will stay on a winning path.

In the long run, my model suggests that there’s huge upside potential for NIO.

My long-term model on NIO makes the following assumptions:

Under those assumptions, I see NIO stock running to $40 by the end of the decade (using a 17X forward earnings multiple).