Read The Full Article On: Innotechtoday

General Motors surprised some industry watchers by making one of its 20 upcoming electric vehicles a commercial van. In addition, the electric van will be the third in a series of new vehicles coming out of the repurposed Hamtramck (Detroit) plant.

Speculation is the unnamed van will use GM’s new global EV platform and the Ultium batteries, which can be configured up to a 200 kWh package to deliver more than 400 miles of range. The vehicle could arrive by late 2021.

Right now, vans are becoming a lucrative segment with electric versions getting out-sized attention, so there’s the logic for a major OEM like GM to pursue. They’re not the only ones.

Next year, the all-electric transit will launch in Europe and finally arrive in the U.S. in 2022, according to Ford COO Jim Farley, around the same time as the company’s all-electric version of its crown jewel, the F-150 pickup.

Ford also has an investment and working arrangement with EV truck start-up Rivian, and the American automaker has made it clear utilizing Rivian’s flexible skateboard battery platform is a priority.

Ford’s not the only partner Rivian is considering. Amazon led a $700 million investment round in the start-up last year and followed up with an order for 100,000 custom all-electric delivery vans over five years. The first 10,000 of those are due to roll out next year before the Ford Transit Electric or GM’s EV hit the U.S. market. Rivian has a plant large enough to accommodate its own planned pickup and SUV as well as the Amazon vans. 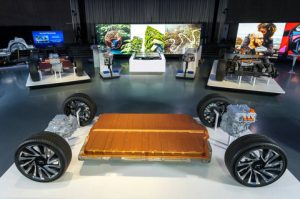 There’s a reason electric vans will first pop up in Europe before finding their way to the U.S. In addition to large fleets trying to lower their carbon footprint, delivery companies are running into new zero-emission delivery zones requiring an electric or fuel cell vehicle. Several major European cities have plans for these zones on the books. Similar zones are being discussed in the U.S., but another factor here is looming regulations in California mandating the production (and eventually the purchase) of zero-emission medium- and heavy-duty trucks.

Europe’s early moves have spurred some OEMs to make their electric move. Daimler/Mercedes-Benz has rolled out an electric version of its Sprinter van, though it has announced no plans to bring it to the U.S.

GM, Ford, and Amazon’s forays into electric vans aren’t the first in the segment. Two approaches have laid out different paths to this market.

Since it tends to specialize with Amazon, UPS, and FedEx, and a sizable list of small and medium-sized companies, the first entrants into the market were upfitters and integrators who worked with OEMs to adapt conventional vehicles to electric propulsion. For example, Lightning Systems, a developer out of Colorado, takes an engine-less Ford Transit and turns it into an electric van capable of 60 or 120 miles of range, depending on the battery pack. A California-based integrator, Motiv Power Systems, has developed a modified all-electric Ford truck chassis that can underpin shuttle buses, school buses, step vans, and other vehicles. 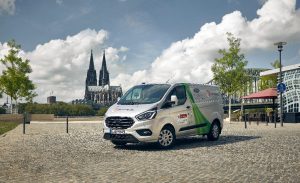 More ambitious is the second approach–designing and building a new electric van from scratch. Chanje out of China and Workhorse based in the Midwest are trying this approach. Chanje is already on the market, working in partnership with Ryder and FedEx, while Workhorse, working with UPS as well as Ryder, is starting to take orders on its electric van while also trying to raise additional operating capital.

Last-mile delivery seems ripe for a transition to all-electric operation if regulations and legislation pushing that direction are heeded. New designs mean an electric van can handle the same volume of cargo. New battery chemistry offer more durability and distance as well as quick charging.