The trademark has just come through.

Does the name Samba mean anything to you? If you’re a fan of old Volkswagens, it surely does. The Samba was the nickname given to VW’s flagship version of the hippie-favorite, the split-window bus. If you like what Volkswagen is doing with its electric program of ID-named cars that includes the compact ID.3, the stylish Volkswagen ID.4 crossover, and the super-cool ID. Buzz Cargo. Now, it seems that the Samba and the ID. electric program are becoming intertwined. Volkswagen has just filed a trademark for the name e-Samba, meaning that the Buzz may soon have a new nostalgic name that also points to its electric propulsion. 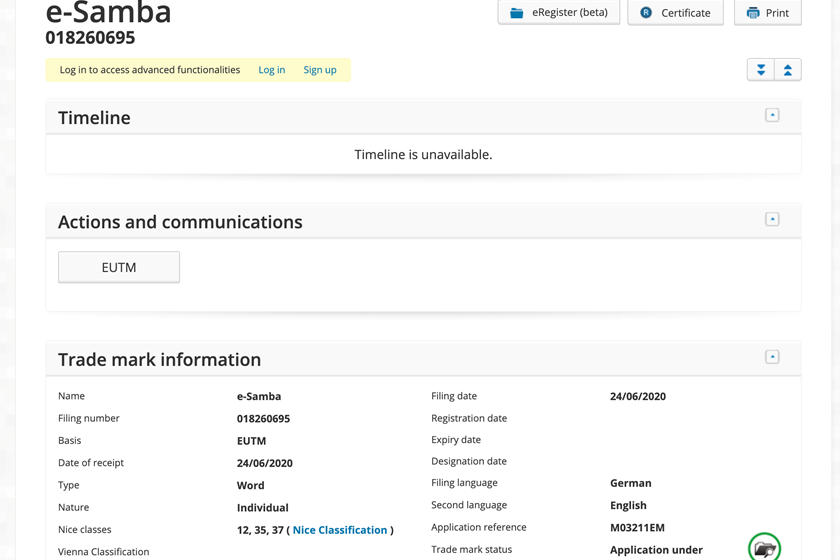 More and more special new models are coming as part of the ID. program, and although we have no exact confirmation of what Volkswagen intends to do with this trademark, it seems possible that it could be applied to a special edition of the ID.Buzz, much like the GTIis a special version of the Golf. If this turns out to be true, there is little doubt that the e-Samba would be a highly popular offering that would fly out of dealerships – provided it has the right stuff to make it usable in the real world. Still, Volkswagen makes people’s cars and shouldn’t have a problem with making the e-Samba, should it become a production bus, very attractive to buyers.

Volkswagen has been indecisive about reviving the Beetle, an icon that arguably set the entire company on its path to world domination. But the knowledge of this trademark suggests to us that Volkswagen is taking the revival of the Samba bus very seriously, and although the Beetle above still may not be reincarnated as a hip, cool, electric car, the idea is certainly there for the bus. Volkswagen seems to be taking electrification as seriously as promised, and the new models and revivals of old ones that this is helping facilitate are exciting for fans of the brand. We can’t wait to see what’s next from VW.